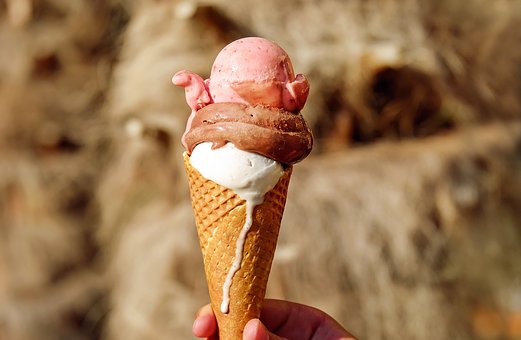 The difference between Italian Gelato and Australian/US/English “Ice Cream”

If you’ve eaten Gelato in Italy (or even Europe for that matter) or from the handful of gelaterias now becoming popular in Australia and around the world, you’ll know there is a difference when compared to the generic “Ice Cream” of the US/Australia/UK. Gelato always seems more intense in flavour, while Ice Cream seems more creamy and ‘fluffy’ almost.

There’s a reason for this. The two are made quite differently and the difference is 3 fold – fat, air and temperature.

The table below summarises the differences which are then explained further underneath.

Ice Cream is heavy on the cream, often contains eggs, and has a fat content usually of  10% or more. Gelato, by comparison, uses more milk than cream, so it doesn’t have nearly as much fat. Gelato also doesn’t use eggs or egg yolks.

Ice cream is also churned hard and fast to whip air into it and increase the volume – the harder and faster you whip it, the lighter and fluffier it will be (but also, the more air you’ll eat with each bite). This means you can make more volume of ice cream for the same amount of ingredients if you churn it faster. Most likely this also helps with respect to financial returns.

Gelato is churned at a much slower speed, introducing less air into the base (think hand whipping cream compared to using an electric beater).

Gelato is therefore denser than Ice Cream, and people often find the flavour more intense and pronounced as it’s not ‘buffered’ by the fat or air.

If you stored Gelato at the same temperature as ice cream (about -18 degrees celsius) then the water would crystallize and become very hard. To compensate for less fat and less air whipped into it, Gelato has to be stored at a warmer temp (typically around -10 degrees celsius).

The fat and air in Ice cream meanst that it can remain creamy at lower temperatures, even the -18degC of your home freezer.

So there you have it!

On my recent trip to Parma, Italy, I took a lesson at my local Gelateria on how to make natural Gelato. Have a read the article here.