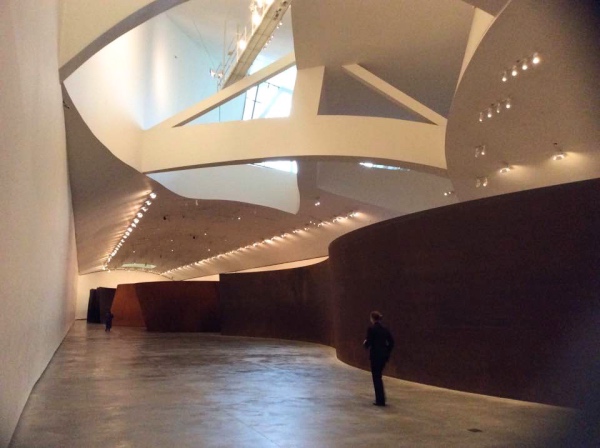 San Sebastian is very much a tourism-oriented city, with its sandy beaches (both surf beach and a sheltered bay), history (it is the centre of the ancient Basque region and language), pintxos (tapas-style bites served on the bars) and fine dining (as a city San Sebastian has the most Michelin Stars per capita in the world).

It’s true, winter in San Sebastian, and northern Spain in general, is WET! And not terribly warm either. But don’t let that deter you! There are still wonderful experiences to be had, even if it’s not the extended beach-break you were hoping for.

Just over an hour from San Sebastian is the city of Bilbao and it’s world famous Guggenheim Museum (there is also a Guggenheim in Venice and New York) which displays permanent and changing exhibitions of modern art.

The ‘flower dog’ in front of the Guggenheim, Bilbao. In Spring and Summer it is covered with flowers!

Even if you’re not a massive fan of modern art, the building itself and its modern architecture is spectacular and a wonder to gaze at, both from the exterior and interior. And the art work is not limited to paintings but sculptures, and interactive geometric installations like “The matter of time” by Richard Serra.

The Plaza de la Constitución is an interesting place. It is now home to several bars, cafes and businesses but it was once turned into a bull-fighting ring several times a year for various festivals and events. You can see the numbers above the doors of the surrounding balconies which were booked by wealthy spectators from where to view the event below.

Pronounced “Pinchos”, the Basque region in northern Spain is most well known for the way they serve a vast array of bite-sized portions in their bars.

All bars and Tabernas in San Sebastian serve a selection of Pintxos all day and night, some are eaten cold, others warm. The city’s proximity to the sea means that seafood in general is a speciality of the region, however, several bars serve their own particular speciality. For example:

Anchovies at Txepetxa, and mushrooms at La Cueva

One might then typically wander around the city, taking a pincho at several different bars, according to their speciality (a ‘pintxo crawl’, one might call it). Washing them down with a glass of Txakoli (Basque white wine) or a small serve of Basque cider – both served by pouring from a height into a tall glass (see above video for this in action).

Winter is a great time of year to do this as the bars are not packed with tourists, allowing you to engage with locals, meeting new people and learn about the Basque culture, history, food and region.

Per capita, San Sebastian holds the most Michelin stars in the world (17 stars and 9 restaurants in total). So if you have the money to spend and/or a special occasion to celebrate then you have plenty of options to choose from.

In my opinion, the rain is not necessarily a reason to avoid San Sebastian in the Winter, however, Spring and Summer would certainly add another dimension of activities (beach, water activities, hiking and nature) to your visit. I hope to one day return with better weather!