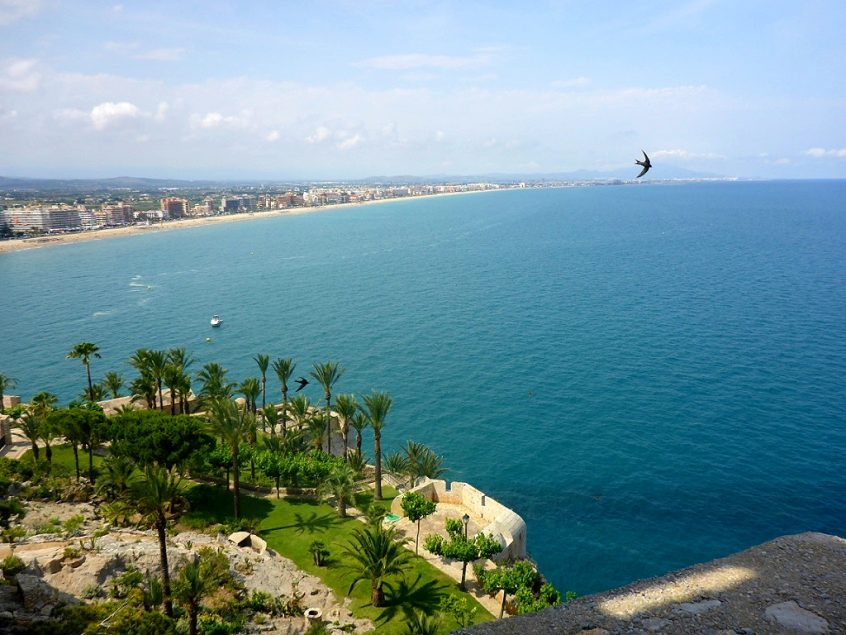 [picture above: View of Peniscola from Castell de Peniscola]

The Spanish cities of Madrid, Barcelona, San Sebastien and Granada draw many visitors to Spain every year. However, along the coast south of Barcelona, in the region of Catalonia, you’ll find many just as beautiful, fascinating and historical towns to visit on your travels.

Beginning just south of Valencia, you have the tiny inland town of Guadalest, home to the ancient Castel de Guadalest, built as a protective lookout. The castle is ominously perched atop a cliff. The imposing aspect was further accentuated in the 17th and 18th centuries when a series of earthquakes caused part of the cliff and castle to collapse, leaving a striking monument and small town climbing up towards what remained of the castle.

A short walk up to the castle rewards you with stunning views out to the Mediterranean Sea, the bright Blue lake below and surrounding mountains.

The Bell Tower and views from Castell de Guadalest

Continue north and you’ll come across Spain’s 3rd largest city, Valencia. Despite it’s population, Valencia retains the feel of a quieter, coastal town particularly in it’s historical centre. The Historical centre was once encompassed by a large stone wall for protection, of which 2 large ‘gates’ remain. Now, a walking track, sporting fields and several parks have been curated in the old river bed (mote) surrounding the old town.

Valencia is a great city to wander around by foot. You’ll come across her cathedral where you can climb the 207 steps up the bell tower for a 360 view of the city; many small churches; the teeming Mercado Central (central market), bull ring, train station, The Museu des Bellas Artes, and several botanic gardens. I found the city to have a very Parisienne feel, particularly when it comes to architecture.

Views from the top of the bell tower of the Valencia Cathedral. Post boxes at Valencia GPO.

A little further from the city centre is the centre for Arts and Sciences, which has made marks with its modern architecture.

For the nature-lovers, this is for you! Slightly inland on your way north from Valencia, take a rewarding detour to the pristine waterfall and crystal-clear streams of Montanejos. A perfect place to freshen up on a hot Summer’s day. Shallow enough to wade through, marvel at the layered colours on the towering rock faces that line the stream. The river-bed is extremely stony, so a word of advice – wear thongs or some sort of water-proof sandals to protect your feet as you wade through!

Swimming under a small waterfall at Montanejos

Take a picnic and enjoy a day basking in the sun, swimming, walking by the river and marvelling at the wonder of Mother Nature.

A great place to stop for Lunch and siesta on your drive is Peniscola. You’ll find well-kept beaches perfect for enjoying the Mediterranean sun, restaurants, hotels and the imposing Castell de Peniscola. The walk through the old town up to the Castell takes you through winding, cobble-stoned streets walled by white, Spanish homes overlooking the blue Mediterranean. The Castell was one of the main bases and defensive ports for the Knights Templar throughout the Middle Ages. It was also home  Avignon pope Benedict XIII (Pedro de Luna) in the 15th Century. The castle has been restored into how it was used during the age of the Knights Templar with an in-depth, informative guide, well worth the entry fee of 4E.

Views of and from Castell de Peniscola

The ancient town of Tarragona is a must-see if you’re in the east of Spain due to its historical significance. From before the 7th Century BC through until the 19th Century, Tarragona was a primary government and trade centre for the Romans, Aragonians, Spanish Empire and more recently, Catalonia. The expansive ancient Roman history of the town left several ruins to explore.

The Amphitheatre used for gladiator and animal shows overlooks the adjacent blue sea and is just across the road from the large vaults, Priori and track for chariot races. A little further away on the other side of the city is the Forum – kind of like the Roman version of CBD. Some of the ancient city wall has been preserved, there is a section of about 1-2km which makes for a lovely walk as the council has set up gardens around it.

Dinner (and lunch for the next day) made with fresh ingredients from the local produce markets. Saving money and the waste-line while travelling.

Tarragona’s Gothic Cathedral is also one of the more spectacular along the coast, boasting a giant, gold-plated alter, serene meditation courtyard and even several local art exhibitions.

Courtyard at the Catedral de Tarragona

Take the time to explore this marvelous coastline, you won’t be disappointed!