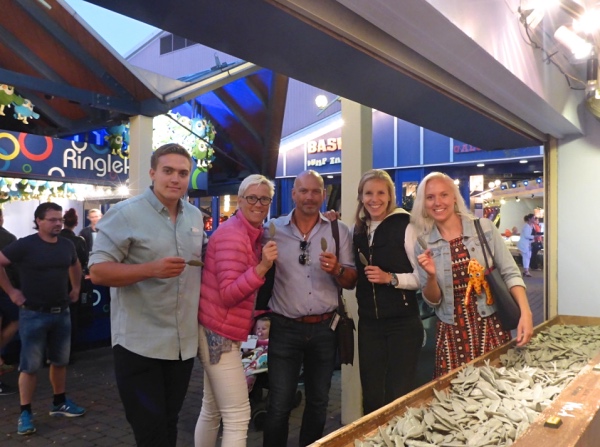 Vagabonding: The Lost Art of Meeting People and Making Friends!

If you followed my vagabonding adventures throughout 2016 you’ll know that I visited some pretty amazing places and met some unique people along the way facilitating some truly once-in-a-lifetime experiences.

However, recently, with the heightened alert for potential terrorism threats and people feeling on-edge walking down the street, I find that many tend to retreat into their shells and avoid meeting new people. So this post is really just an account of some amazing vagabonding experiences I had just because I started a conversation with someone and made a friend (or ten).

These types of stories are becoming less and less common these days. I feel like meeting and traveling with strangers used to be a lot more common, especially when you exclude the pre-organised coach/cruise/train tours.

Anyway, without further ado, here are a handful of my fun, vagabonding stories!

How taking selfies in Paris took me to a homestay in Sweden for a week.

The story goes like this. I had just spent the afternoon wandering through the Musée du Louvre with my good friend Karl (Crossfit Masters) and his family,  I was walking back to my apartment to have dinner and pack for departure the following day. While I was waiting for a traffic light to change, I saw a couple sitting at a cafe trying (quite poorly) to take a selfie of themselves with the crêpes they’d ordered. Naturally, I offered to take the picture for them. We got chatting, discussing their visit to Paris and my travel around Europe, to which they were fascinated by the concept of Housesitting. In any case, we got along very well and exchanged details before they invited me to visit them at their home in Sweden if I ever got the chance.

Getting competitive at arcade games with my Swedish friends Georg, Pia and their children Nata and Chris!

A few weeks later, some French travel plans were cancelled on me so I contacted Pia and Georg who were thrilled for me to come and stay! So, I went to Sweden, where I had the amazing week with the most kind and generous family! I stayed for 5 days, studying a few days and touring the Kungsbacka/Gothenburg regions on the others.

Myself and Pia on the day I left Sweden

A quick toilet stop ends in attending an exclusive Antiques Auction in Paris with the security detail for the French President.

Another night in Paris! This time I was also on the way home and needed desperately to use the bathroom so I popped into a quiet bar and asked the bartender if he’d be so kind as to let me use his loo. I grabbed a drink on the way out and began chatting to him, and the other patrons in the bar; a group of gentlemen who had just knocked-off work around the corner. Turns out they were part of the French President’s security detail! They weren’t so forthcoming with info about the President but they loved telling me about all things French and about their hometowns outside of Paris.

Jean-Pierre and I sipping champagne

They were heading to an antiques auction around the corner and invited me to join them (I didn’t know the word for ‘auction’ in French so this took a while before I really understood what I was being invited to). Next thing I knew I was sipping (real) Champagne, nibbling on gourmet canapés and gazing at bracelets estimated to sell for 12000-20000 Euro!

Being able to speak French was a big help but no reason this couldn’t happen elsewhere!

During the two weeks I spent in Parma, Italy, I think I tasted just about every flavour of gelato there was at my local gelateria. One day, not expecting her to say yes, I asked Marina (the owner) if I could see how she makes the Gelato. She said YES! I wrote a full blog post on this and made a video montage which you can see here.

While housesitting in Burgundy I was doing my shopping at the local markets where I was swayed to taste some local biodynamic wines on offer. I got chatting about all things wine (both French and Australian) with the maker, Frederic. Then Fred asked if I’d like to come grape-picking with them tomorrow, to which of course I said yes! The following week I also pressed the same grapes that I’d picked by stomping on them with my feet (pigeage). Have a look at the full blog and VIDEO here.

I was waiting for my plane in a cafe at Amsterdam Airport. The bloke across from me looked to be busily working away on his laptop – I asked him what he was working on. Next thing, we’re discussing all things travel and Spain (where he was from, and where I was heading to). I was advised on the things I should do and dishes that were local to all the different regions. When I mentioned I’d be in Barcelona later that month, we arranged to have dinner while I was there. Ignasi, his girlfriend, my friend and I enjoyed a wonderful evening ‘tapas hopping’ in Barcelonetta, sampling everything from Vermouth to blistered peppers, chorizo, Sangria and finishing it off with a Beer on top of the Catalan History Museum.

My mother and I met with Ignasi again when we returned for another visit to Barcelona. This time a Lunchtime tapas in Graçia followed by a wander through Gaudi’s Park Guell.

How a simple trip to buy some wine turned into an afternoon of local sight-seeing and an extended wine tasting!

While staying with a friend in the south of France I stopped into a Cave (wine cellar) to find a local bottle for dinner. I was the only person in the store and the manager was more than happy to show me, and let me taste, the best of the region (which happened to be Malbec). I also asked what are some of the best places to visit nearby, to which he immediately responded with St Cirq-Lapopie, gushing about how pretty it is. I asked if he had any days off when he might be willing to show me the town himself. The following day was his day off and he was more than happy to show me around!

After the afternoon of sight-seeing we returned to the Cave where we and his colleagues enjoyed an extended tasting of the local delights!

A passing comment on Social Media lead to a REAL Spanish friend and a tour of Murcia, Spain!

Ok, so, as much as I sometimes dis social media, I do have a great amount of respect for it (I use it a lot to share my travels and keep in touch with people back home) and its SOCIAL users! When I was in Spain, I posted a picture of some markets in the town where I was staying. Someone commented on one of my photos wishing me a great time and mentioned that she lived there. A few comments back and forth and we’re meeting up in town and Alodia is giving me a tour of Murcia, including the best local Tapas bars!

Alodia and I taking a tour of the Casino in Murcia

More and more I see people being less social – hunched over, looking at their smart devices, isolating themselves from others with headphones, and rarely making eye contact as you pass in the street or buy your groceries. Whatever happened to stopping to smell the roses?

What’s the point of wandering around Paris (or ‘insert other amazing place here’) if you’re looking at your phone the whole time? How about really taking in the sights, not just snap-chatting a pic then leaving. How about breathing deeply and absorbing the delicious smells of the boulangeries that waft down the streets every morning, really savouring that croissant, and while you’re at it talking to the baker about how he makes it?

Correct me if I’m wrong, but is that not the point of travel – to really EXPERIENCE a new place, including its culture, people and customs? Can we not say the same for life in general? I’ll tell you a secret – living a REAL life is so much better than living a virtual one ;).

Moral of the story, look up, look around, make eye contact. If someone is wearing a cool pair of pants or shoes – tell them! Ask people about their home, family, work and life. You may not end up in Sweden but you may make a new friend, learn something valuable, have some other unique experience or have a nice conversation. Worst case scenario, they don’t even look at you but you feel good because you made the effort to pay them a compliment.

In a world where violence and terrorism dominates the news, the more we can spread good will and good intentions the more the message will get out there that the future doesn’t have to be ‘doom and gloom’ but can be full of fun and excitement!