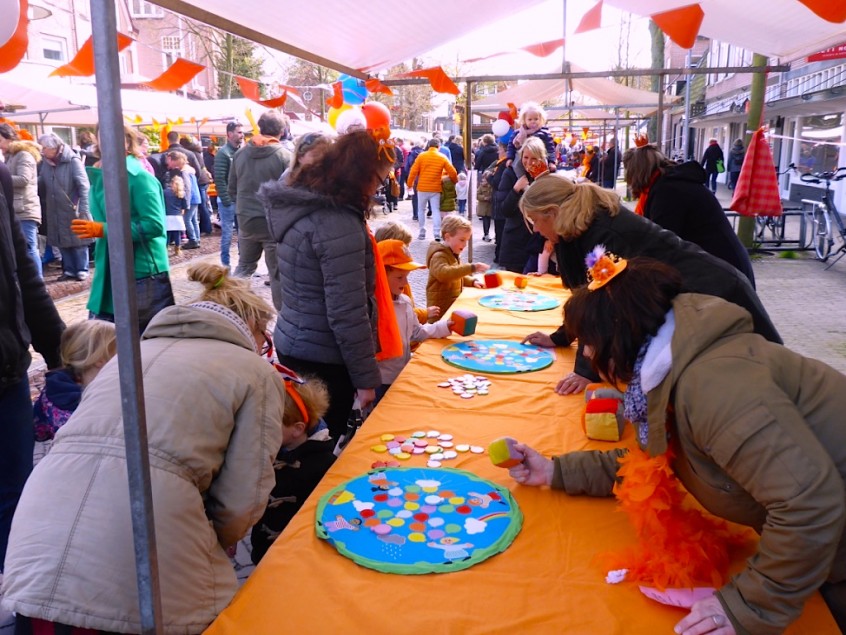 I had the pleasure of arriving in the Netherlands from Hong Kong at 6:35am on 27th April 2016; Koningsdag!!

Along with the warm and welcoming arms of my Oom (Uncle) Frits, I was greeted by some crazy orange decorations, from clothes, hats and balls to flags, rings and earrings (orange is the Dutch national colour, if you didn’t know). Koningsdag, or “Kings Day”, is a national holiday in the Netherlands in celebration of King Willem-Alexander’s birthday.

After unpacking my things and having a bit of a rest, my Uncle and I walked into the local village of Bergen to check out the festivities! Firstly, there was A LOT of orange everywhere. And Dutch flags. Plus many things you’d expect to see in Holland, people on bikes, bikes parked, red windows, cheese shops, stands selling kroketten (croquettes), frites (fries, you eat them with mayonnaise in Holland), pannenkoeken (pancakes) and stroopwaffles (syrup waffles – these are different to Belgian waffles; I’d describe them as 2 waffle cones, flattened out, with dark syrup in between, served warm… drooling).

The main part of the morning is for the kinderen (children). Each child can pay a Euro to obtain a card that has a series of games/tasks to complete (think side-show alley with lots of different, usually target-oriented, games), if they completed everything then each child gets a prize!

Another tradition, is that King’s Day is the only day that people are allowed to sell their wares (without a license) on the streets. And so, along with children’s games in town, there are dozens of people in the park and on sidewalks with belongings laid out on blankets/rugs or on tables, selling their ‘trash for treasure’ so to speak.

Each year the King and his family celebrate in a different regional town centre in the Netherlands, sometimes there’s a parade but there’s always lots of music, laughing and (like any birthday) speeches.

Interestingly, before Willem Alexander ascended the throne in 2013, the holiday that was celebrated was Koninginnedag (Queens Day) as there were 3 reigns of Queens before him; his mother Beatrix, her mother Juliana and her mother, Wilhelmina. Queen Juliana’s birthday was on 30th April thus the holiday was celebrated on that day from her coronation in 1948. Beatrix chose not to move the holiday when she ruled from 1980-2013. And so, not only has the name of the day changed in recent years but also the date.

Funnily enough, every year there are always many groups of foreigners who likely have out-of-date travel books, that come The Netherlands (particularly Amsterdam) every year on 30th April in search of a celebrations and festivities! Several pubs have made special parties/allowances for them, which I think seems kind of strange… but I guess it’s business.

At the end of the day, the tradition is to drink a nightcap of a special orange liqueur, Oranje Bitter. Typically people twist tradition, helping themselves to several nightcaps, earlier in the day 😛