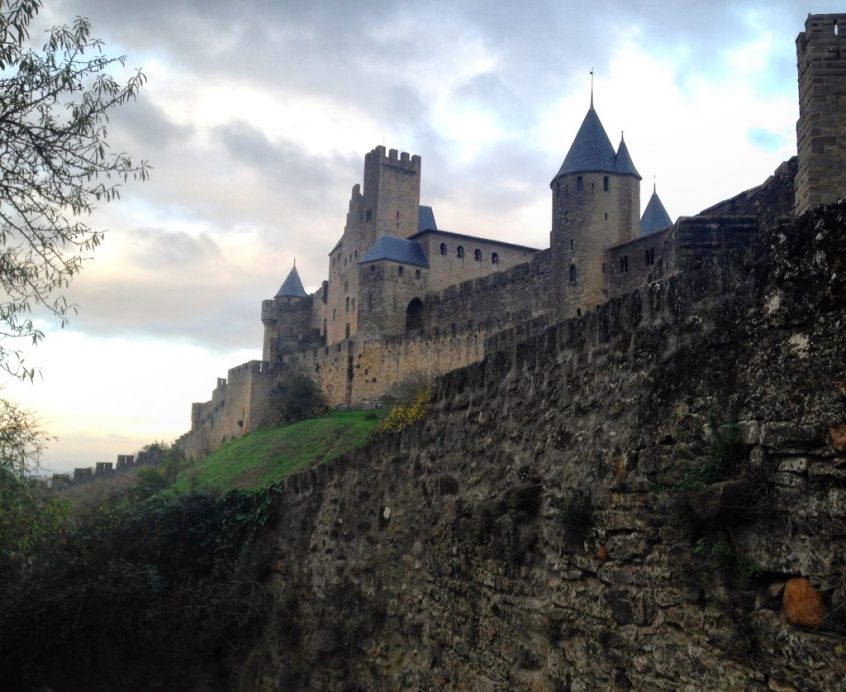 Carcassonne is a city situated in the Aude department in the South-West of France. Its hilltop has been inhabited since the Neolithic period and is perfectly situated along routes linking the Atlantic Ocean with the Mediterranean Sea as well as Central Europe with the Pyrenées.

Throughout the centuries, Carcassonne’s strategic location has been utilised by the Romans followed by the Visigoths and then their descendants. The Romans were the first to construct the Ramparts (fortifications) which were continually strengthened and added to over time. Carcassonne became a seemingly impenetrable city in many territorial disputes between the Catalonians, French and Spanish right up until the mid-1600s.

In 1659 the Treaty of the Pyrenées transfered the then border province of Roussillon to France and the city’s military significance reduced. As a result, the upkeep of the city’s ramparts were neglected with a large portion of the fortifications falling to ruin.

In 1853 theorist and architect Eugene Viollet-le-Duc set about restoring the medieval fortress. Eugene died in 1879 leaving copious drawings and notes to guide the completion of the project which continues on an ongoing basis today. In 1997 La Cité de Carcassonne was added to the UNESCO World Heritage Sites.

The main entrance gate to Carcassonne

The ‘back gate’ entrance and Ramparts

Nowadays, La Cité, situated on the hilltop in the centre of the greater city of Carcassonne, attracts many tourists each year. The Chateau within the fortress is certainly worth a visit with a fabulously curated audio-guide covering the city’s history and inhabitation. For something a little different though, take a peek at the Musée de l’Ecole (School Museum) on Rue du Plo and practice your writing skills with traditional ink quills. Or if you’re interested in something a little more gory, check out the Medieval Torture Museum (Musée de l’Inquisition) to see some of the cruel practices that were used for imprisonment and interrogation.

The Chateau within the restored fortifications.

Like anywhere in France, you’ll find great food and Wine in Carcassonne. Mum and I had a beautiful lunch at the Auberge de Dame Carcas just opposite the entrance to the Chateau.

It was really fun to transport ourselves back in time several centuries in Carcassonne. Definitely worth stopping in, but you probably only need 1-2 full days to see everything.

View from the Chateau over the surrounding region.