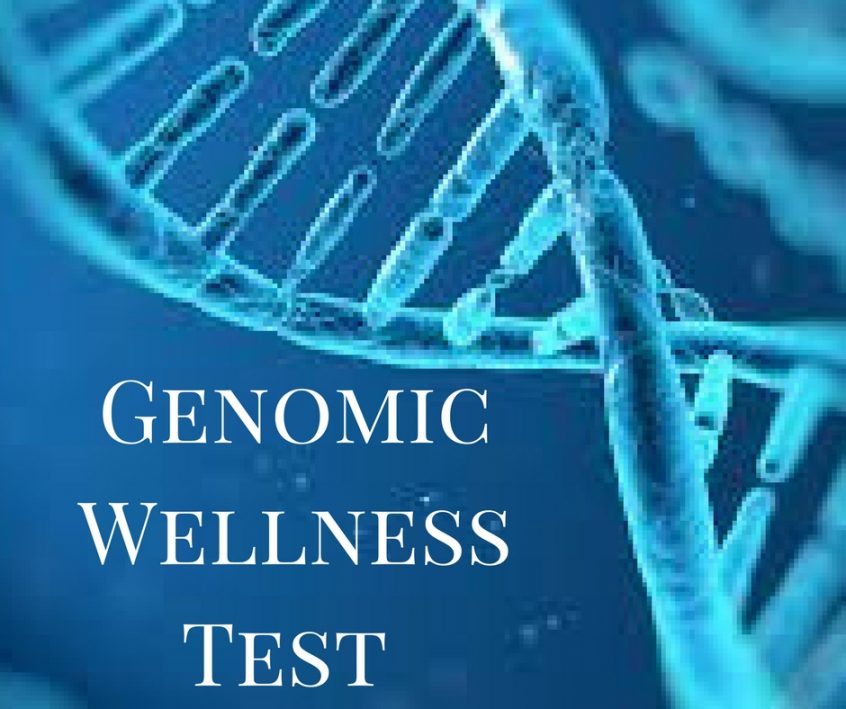 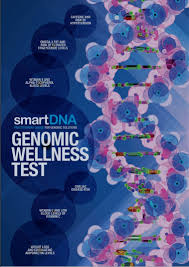 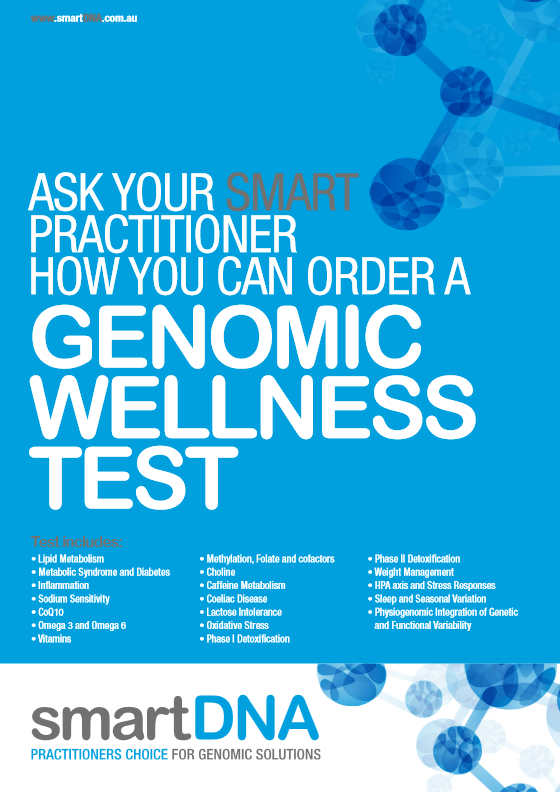 Understand how your DNA affects your health with smartDNA Genomic Wellness test.

*One test is suitable for only one person, to understand the DNA of your partner/family/friends then you will need to order multiple kits.

Your Report will provide details regarding your:

Understand how your DNA affects your Health with a smartDNA Genomic Wellness Test.

With a simple saliva (spit) sample we’re now able to map over 100 different genetic changes (SNPs, single nucleotide polymorphisms) specific to health, metabolism and fitness, helping you to optimise your lifestyle to get the best out of your genetics!

As a smartDNA Practitioner I facilitate this test for you and take you through your results one-on-one directing how you can best optimise your lifestyle for your genetics with comprehensive action steps.

Which genetic variations does the test screen for?

The lipid panel is main hub for a heart health based diet. In particular Apolipoprotein E (APOE) genotyping maybe ordered by the practitioner when a patient has significantly elevated cholesterol and triglyceride levels that do not respond to dietary, exercise and lifestyle changes. A number of genetic variants have been identified that negatively impact the concentration of plasma lipids in response to the amount and type of fat consumed; total cholesterol, HDL-C, LDL-C and triglyceride levels. These genetic variants analysed include APOA1, LPL, ABCA1, CETP, LIPC, APOB, APOB100, APOCIII, APOA5,LDL-R, eNOS3, FABP2 and LPA.The application and clinical benefit is for those patients with disorders of lipid metabolisms. The patient has an active role in lifestyle changes with specific nutrition based therapy. The selection of other genes involved in lipid metabolism is targeted to genes involved in HDL-C level, fat absorption, fat transport and the conversion and degradation of fat. Dyslipidemia can have various genetic causes which are influenced by nutrition, alcohol, smoking and sex-specific effects.

This is a genetic risk assessment for Type II Diabetes and Metabolic Syndrome (MetS). Diabetes is one of the major diseases of this century and genetics, lifestyle and nutrition are all equally important considerations. The long-chain acyl CoA synthetase 1 (ACSL1) and acetyl-CoA carboxylase (ACC2) play a key role in fatty acid synthesis and oxidation.  Disturbance of these pathways is associated with impaired insulin responsiveness and metabolic syndrome (MetS). Moreover the ACSL1 and ACC2 gene polymorphisms are modulated by dietary fat intake. The individual being tested is genetically predisposed to normal, moderate or high level of Diabetes risk. Genetic variations detected in the TCF7L2,WFS1 and SLC30A8 genes have been reported to play a role in insulin function. The, FTO, G6PC2 and PPARG genes will indicate an increased likelihood of developing type 2 diabetes due to a higher BMI (FTO), reduced control of blood glucose levels (PPARG andG6PC2) or reduced pancreatic beta cell function (SLC30A8).

Inflammation has a key role in chronic diseases including diabetes, osteoporosis, obesity, aging and cardiovascular disease. Susceptibility to increased inflammatory response is genetically determined. Common variants found in the TNFA,IL6 and CRP genes are analysed.

High blood pressure or hypertension is the leading cause of strokes and major risk factor for heart attacks. Two gene variants are analysed ACE and AGT which have been reported to be associated with sodium sensitivity.An individual with a “salt sensitive” genotype may result in higher plasma angiotensinogen levels and ultimately higher blood pressure leading to an increased risk of hypertension.

A variant in the NQO1 gene is associated with reduced NQO1 enzymatic activity reducing the one electron reduction of quinones that results in the production of radical species.

There are genetic makers associated with lower levels of vitamins B2, B6, B12, C, D and E. Variants in the MTHFR, NBPF3, FUT2, GSTT1, GSTM1, SLC23A1, INTERGENIC, GC, DHCR7 and CYP2R1genes are markers which may indicate lower levels of dietary vitamins.

The ability to reduce homocysteine to cysteine and methionine is influenced by genetics, environmental factors especially vitamins B2, B6, B9 and B12 as well certain medications and lifestyle factors. Variants in the MTHFR, MTRR, MTR, CBS, TCN2 and SLC19A1 genes are associated with elevated homocysteine levels and an increased risk of vascular disease including peripheral and cerebral vascular disease, coronary artery disease and thrombosis.

Genetic variation in the MTHFD1 gene is associated with an increased risk of developing choline-deficiency induced organ dysfunction and/or having a child with a neural tube defect. This is due to the increased demand for choline as a methyl group donor. Low dietary choline has been reported to contribute to high homocysteine levels.

Oxidative stress is a major cause of premature ageing and cell death. The major enzymes involved in anti-oxidative defence SOD2, GPX1 and CAT are assessed.

Phase I and Phase II Detoxification

Drugs (including caffeine), metals and hormones are transformed in the Phase I process into reactive bioactive compounds. The enzymes CYP1B1, CYP1A1 and COMT are involved in this process. Assessment of the enzyme function is useful in relation to the processing of compounds such as xeno-estrogens.  Metabolites from Phase I detoxification are transformed into water soluble compounds which are then excreted in urine. Down regulation of Phase II detoxification may lead to an accumulation of toxic metabolites. The glutathione transferase enzymes GSTT1, GSTM1 and GSTP1 are involved in this process.

There are no reviews yet.